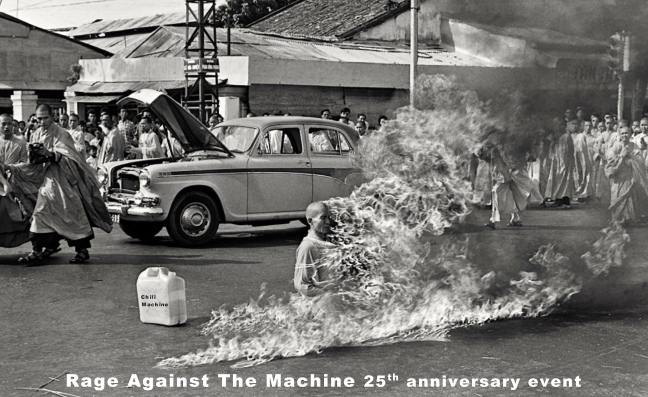 You would think a man burning himself to death at the footsteps of The White House in protest of President Trump would be a big story. Who is the guy? Why did he do it? What were his beliefs? Where did he get the idea? Who has done things like this in the past?

The man’s name is Arnav Gupta. An awful woman with no morals captured the suicide on her phone as she laughed, dehumanized, and trivialized the plight of this tragic man. It’s an item for the media to bury because wealthy, well-educated, intelligent, artistic, globally-minded, anti-white, brown-skinned Green Party, Democrat-favoring democratic socialists are not supposed to do such violent things. How could they conceive of such violence when they are busy bringing equality and rainbows to the world?

NewsGuard “trusted” sources like CBS, NBC, New York Post, Business Insider, and The New York Times currently fill the first page of results for a search of “Arnav Gupta.” The articles are a carbon-copy of misleading nonsense, answering none of the important questions.

Their narrative presents Arnav Gupta as a crazy person who just haphazardly set himself on fire in a location that has no meaning at all. They inspire this misconception with the phrase, “his family put out a missing person report and the police said that they were concerned about his physical and emotional welfare.” The reader is left to speculate upon their half-truths.

Luckily, alternative journalists investigated the event before the deceivers expurgated public information. Heavy.com provided personal information, and TMZ provided info from the cops indicating that they believe he was on synthetic marijuana laced with PCP during the self-immolation, due to the way he reacted to being on fire.

Here is what the “trusted” news sources hid from you:

If you are accustomed to seeing your family every day, would you report them missing to the police when they leave the house in the morning? The sequence of events indicate that his family knew something about his intentions prior to his suicide.

His ode to the black panthers and anti-colonial art indicate a leftwing-indoctrinated racial paranoia and hatred of American history. This narrative playing in his head, indoctrinated by his educators, entertainers, and journalists fed his extremism – a great tragedy.

His schooling and work history suggest he was a “minority” man from wealth, private prep school, private college, and great privilege, who couldn’t seem to find gratifying profession and purpose in life. I say “minority” figuratively because based on his location and affiliations, it’s not likely that white people were a majority in his daily interactions.

His poetic style is common in leftwing culture – syncretism in veneration of axiomatic diversity and “inclusion.” In it, he mixed profanity, Ebonics, and awkward high-level vocabulary pulled from a thesaurus, like the scriptwriters of Keith Olbermann’s leftwing news punditry show.

It may seem odd to political moderates, but in extreme-leftist culture, to be enigmatic and contradictory gives an appearance of intelligence. In reality it is just a substitute for genuine knowledge and articulation. They have no patience to acquire deep knowledge, so they operate on superficial, trendy, and rhetorical information.

Self-immolation is an item of awe in leftist political history. The popular socialist band Rage Against the Machine made it the cover of their first album. There are hundreds of known cases of self-immolation in (mainly) leftwing political action across the globe. Leftist believers say that it “sends a message” to authority that they can oppress a people, but not defeat their willpower.

High levels of passive aggression use self-harm with the intention of psychologically frustrating a person who cares about the instigator. This infantile psychology does not translate well to political action. Passive resistance is a form of protest, and self-immolation is a very dramatic instance of it. If the level of opposition is organized crime, or terrorist groups weak enough for a state militia to overpower them, then passive resistance can yield results. The KKK is an organization that was effectively faced with passive resistance. Those who harm themselves garner support and outside pressure.

A legitimate military and government does not fall for such tactics. Like a wise person who shows apathy to passive aggression (realizing that the person is manipulating them), a force as powerful as the Chinese military will not respond favorably to self-immolation.

The activists argue that it gives their cause attention and international aid. That is absurd. Only civil war would achieve what the protestors imagine. They can say that they will humiliate a power like China, but at the end of the day, those who cooperate with the Belt and Road Initiative have special interests, and they are not going to give up their own prosperity because a group of dissidents are engaged in self-harm.

The same kind of leftist empty threats and hypocrisies are currently in play against Georgia for its abortion ban. Companies like Disney threaten business in Georgia, while they do business in China which puts Muslims in concentration camps.

Business and diplomacy is pragmatic. It is not idealistic. Idealism is for the idiot who worships at the altar of a political podium. And those who observe rationally from the outside are not impressed with the liars who speak from both sides of their mouths, boycotting Georgia while pandering to China and Saudi Arabia.

The Public Confusion, The Media Coverup

Arnav Gupta is a tragedy, plain and simple. He chose lethal passive resistance to protest Trump. It is the wrong tool for what he intended. And his fellow leftwing activists care so little about him, that they bury his story for fear of copycats, and exposure of the extremism their Green Party and socialist members are inspiring. They don’t want people to start talking about eco-fascism and the deranged political ideology they inspire. They don’t want copycats to make the Democratic Party look more dilettante than they already do after the Mueller Report.

They dishonor his life by expurgating the records of his expressions, and hiding information about him. They dishonor him again by calling him crazy. Arnav Gupta was not crazy. A crazy person is impulsive, does not make plans, and does not contemplate agendas and meaning for their actions. Gupta is quite the opposite of crazy – he contemplated this extreme political agenda more than most of the Democrats who claim to be on his side.

He made a conscious and rational decision to end his life in order to advance his agenda. Granted, his choice of action was a foolish one, but his own leftwing romanticism of passive resistance and self-immolation inspired that error of judgement.

It is the habit of people to call their own extremists “crazy” and their opposition “monsters.” They don’t like admitting that they share culture and politics with an extremist. Better to call them crazy, so they don’t have to face the fact that their ideology has inspired extreme action. But if it is the opposition, it’s very easy for them to simply deem them monsters who need to be controlled by more laws.

Conveniently, those laws are already the ones they want to pass, without their scapegoat boogeyman.

If I could help Arnav Gupta to enact positive civic impact with his tragic sacrifice, I would suggest that leftists reconsider self-immolation. It is not some kind of romantic civil rights martyrdom. Passive resistance in general is a childish and idiotic choice that does not yield results. Disrupt a highway? Anger commuters who have to work for a living. How does the cause gain respect?

As for the Tibetan monks, if they kill themselves instead of the CHICOMs, then they just helped the MSS & PLA remove one less person to oppress and drain their budget. The larger the ranks of the opposition, the bigger the problem for the PRC.

If an authority is doing something bad enough for a protestor to kill themselves, they should be killing the authority instead. The amount of ideological indoctrination required is massive, to inspire a suicidal protest by a wealthy, “minority,” well-educated leftist surrounded by people who agree with his politics.

If they can’t justify a war, then they need to act with rational, peaceful, and intelligent civics. Passive resistance is an adult tantrum writ large. And how awful of the NewsGuard “trusted” websites to dishonor Gupta’s life by burying his story in obscurity and lead people to believe that he was crazy.

Arnav Gupta is no crazier than any soldier who thoroughly contemplated civic values, and risked their life to advance them. I only wish he understood warfare and civics as well as our military officers. He may have then understood the futility and ignorance of his plan. May he rest in peace and inspire others to pursue constructive civic engagement rather than performance art, propaganda, and emotive manipulation.